Senate to vote on $1.9T COVID relief bill this week 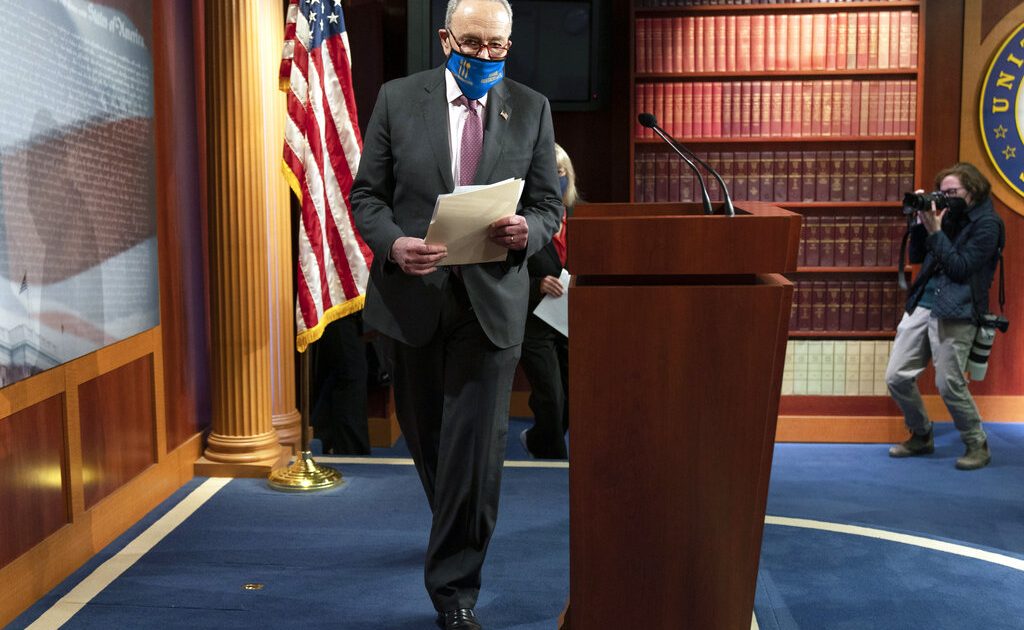 UPDATED 1:10 PM PT – Tuesday, March 2, 2021
Republicans are challenging partisanship and wasteful spending measures in the Biden administration’s $1.9 trillion COVID relief package. On Monday, Senate Majority Leader Chuck Schumer (D-N.Y.) said the Senate is slated to vote on the American Rescue Plan this week.
The Senate will take up the American Rescue Plan this week.
And make no mistake: We will pass the bold COVID response Americans urgently need.
— Chuck Schumer (@SenSchumer) March 2, 2021Schumer said he expects it to be a “hardy debate,” as the upper chamber has remained divided 50-50. This weekend, the House voted to pass the legislation with no GOP support.
If passed, this package would provide Americans with $1,400 stimulus checks, extend unemployment benefits until August and give $350 billion to states and local governments. It would also boost funding for COVID-19 vaccines, testing, mass transit systems, renter relief, colleges and small businesses.
While Democrats continue to claim the bill is urgent, Republicans have said Democrats are trying to push through their own hidden agendas. Speaking on the floor Monday, Senate Minority Leader Mitch McConnell (R-Ky.) called the bill completely partisan.
Only 1% of the Democrats’ partisan bill goes to vaccines. Less than 9% to the entire health effort. It backs the Big Labor myth that schools can’t reopen safely right now — yet only a small fraction of its K-12 money would go out this year.
Liberal ideology, not families’ needs.
— Leader McConnell (@LeaderMcConnell) March 1, 2021“House Democrats rammed through the bonanza of partisan spending they are calling a pandemic rescue package,” McConnell stated. “Only Democrats voted for it. Both Republicans and Democrats voted against it.”
He added that COVID packages last year went from having up to 90 percent bipartisan support, to now only receiving support from Democrats.
“Even famous liberal economists and liberal editorial boards are saying their half-baked plan is poorly targeted to what families need,” McConnell added.
While some Republican lawmakers, including Sen. Josh Hawley (R-Mo.), support stimulus payments, Sen. Rand Paul (R-Ky.) stressed the bill’s high price tag could be devastating for the U.S. economy.
“The bill’s going to be done with only Democrat votes, and it’s going to be $2 trillion of borrowed money. What that means is, it dilutes the value of the money that you have,” Paul said. “So your currency becomes worth less and eventually prices will rise, and ultimately it’s the boom and bust cycle.”
Paul called for the bill to be delayed, pointing out COVID case numbers are “dramatically declining,” citing a 77 percent decrease in cases in roughly the last six weeks. He suggested lawmakers should instead focus on reopening the economy and “letting people live again.”
While it is unclear how long the divided Senate will debate on the American Rescue Plan ahead of the March 14 deadline for Joe Biden’s signature, the vote is expected to happen on Friday.