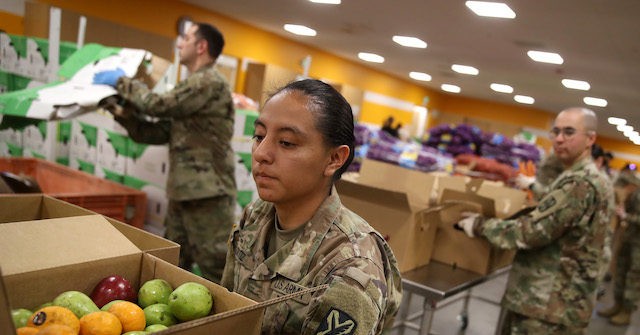 Michigan National Guard Protecting U.S. Capitol Made Ill by ‘Substandard’ Food
7 Justin Sullivan/Getty Images
Kyle Olson
2 Mar 2021
Michigan National Guardsmen deployed to protect the U.S. Capitol have been given substandard food, according to troops stationed there.
Photographic evidence was supplied to NBC 6 and ABC 7, which showed undercooked meats, rotten fruit, and moldy bread:
TV6 & FOX UP have new pictures of the non-edible food provided to Michigan National Guard members in Washington,…
Posted by Andrew LaCombe on Monday, March 1, 2021
Some meals even contained metal shavings, according to photos posted by NBC 6.
A “whistleblower” told WXYZ that 75 meals were thrown out Sunday.
“Yesterday, for instance, there were 74 different meals found with raw beef in them,” the sergeant said.
“Just yesterday, the lunches were, soldiers had found metal shavings in their food.”
The meals were so bad, “a dozen soldiers” were sickened and some even went to the hospital.
He said breakfast sometimes consisted of “a dinner role and Sunny D.”
“The Michigan National Guard finds the reports of undercooked and poorly prepared food provided to our service members in Washington, D.C. very concerning,” it said in a statement.

U.S. Rep. Bill Huizenga (R-MI) called for Guardsmen to return home in January, only for them to be redeployed for the impeachment trial.
“These are citizen soldiers who have families back home, have businesses back home,” he told Breitbart News Tuesday.
“It begs the question do we need to have the force we currently have and who provides it?”
Huizenga argued since it is federal property, the D.C. National Guard should be able to protect the Capitol building.
About 1,000 of the 5,000 Guardsmen still near the Capitol are from Michigan.
He said he recently talked to Guardsmen on Capitol Hill from Guam, who live nearly 8,000 miles away. Several members of Michigan’s delegation sought answers from House Speaker Nancy Pelosi about the necessity of the presence, but the inquiry was ignored.
Huizenga questioned why Gov. Gretchen Whitmer (D), who is in command of the Michigan National Guard, would keep them in the federal capital.
Michigan’s troops are scheduled to return to the state March 12, but the acting Capitol Police chief has requested a Guard presence until President Biden’s yet-to-be-scheduled speech to Congress is over.
Rep. Jack Bergman (R-MI) said the food issues have been resolved, but “we are still looking into it as a team to see how this happened and ensure this doesn’t happen again.”
He also said it is “past time” for Michigan’s National Guard to return home.
Kyle Olson is a reporter for Breitbart News. He is also host of “The Kyle Olson Show,” syndicated on Michigan radio stations on Saturdays–download full podcast episodes. Follow him on Parler.
National SecurityPoliticsBill HuizengaGretchen WhitmerMichiganNancy PelosiNational GuardU.S. CapitolWashington DC
.