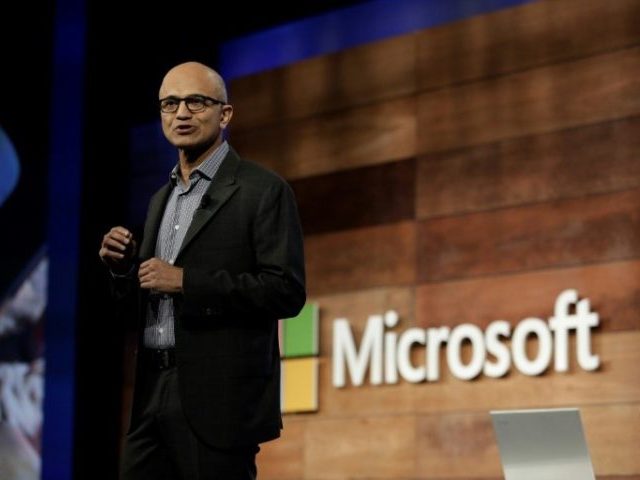 Bokhari: Microsoft and Friends Want to Destroy Online Privacy
1,730 Jason Redmond/AFP
Allum Bokhari
25 Feb 2021Microsoft has teamed up with a number of tech and media companies to create a system of tracing content around the internet that could destroy online privacy and anonymity, radically transforming the nature of the web.
Against stiff competition, the alliance of tech and media giants has devised a plan that may constitute Big Tech’s most brazen power-grab yet.
According to Microsoft’s press release, it has partnered with several other organizations to form the Coalition for Content Provenance and Authenticity (C2PA).
Put simply, the purpose of this organization is to devise a system whereby all content on the internet can be traced back to its author.
The press release states that it will develop these specifications for “common asset types and formats,” meaning videos, documents, audio, and images.
Whether it’s a meme, an audio remix, or a written article, the goal is to ensure that when content reaches the internet, it will come attached with a set of signals allowing its provenance — meaning authorship — can be detected.
Consider the companies that have signed on to this initiative. Leading the pack is Microsoft, which operates Word, Paint, Notepad, Edge, and the Office Suite. If you create a .doc or a .jpg, a Microsoft service is probably involved in some capacity.
Then there’s Adobe, the company behind Photoshop, Illustrator, Acrobat, and Premiere Pro, as well as several other market-leading applications for publishing photos, videos, and documents.
There’s also Truepic, a company that has developed technology to track the provenance of photos from the very moment they are captured on a smartphone.
Finally, there’s Intel, which dominates the market in laptop and desktop central processing units (CPUs). The CPU is responsible for processing virtually all information on computers. Whether you’re typing a sentence or taking a screenshot, it’s the CPU that is processing that data.
Accessing the CPU is the ultimate form of digital surveillance. Even if you’re disconnected from the internet, the CPU still sees what your computer is doing.
The combination of these forces creates the potential to track and de-anonymize information from the moment it is created on a computer. Signals could be attached to information to ensure it is censored and suppressed wherever it travels online. Even if someone else is sharing the information, it could be suppressed simply because of its point of origin. And, of course, the signals could be used to identify the creators of dissident content.
Nowhere in Microsoft’s press release is there any indication that these are not the ultimate goals.
And, in fact, the press release gives several indications that these are precisely the ultimate goals.
According to Microsoft, the coalition was created for a single purpose: to stop the spread of “disinformation” — which, in modern establishment journo-speak, means information that challenges establishment narratives. Disinformation, based on how the word is used today, might as well be called dissident information.
According to Microsoft’s press release, the coalition has been established “to address the prevalence of disinformation, misinformation and online content fraud through developing technical standards for certifying the source and history or provenance of media content.”
Naturally, the mainstream media, which is most threatened by dissident information, is heavily involved. The precursor to this coalition, Project Origin, included the New York Times, the BBC, CBC, and Radio Canada.
Project Origin’s mission statement declares:
Misinformation is a growing threat to the integrity of the information eco-system. Having a provable source of origin for media, and knowing that it has not been tampered with en-route, will help to maintain confidence in news from trusted providers.
The goal has been stated up front. The establishment media wants to trace the origin of all digital content so that “trusted providers” can be distinguished from non-trusted providers.
We all know what this means by now. The difference is that instead of doing it via the censorship of online social media platforms and search engines, they are now going to do it at the level of offline software and hardware, most likely down to the most fundamental unit of computer hardware – the CPU.
In other words, there will be nowhere to hide.
Even the brazen behavior of Facebook, Twitter, and Google over the past year — the election interference, the censorship of a President, the mass-censorship of grassroots political movements — pales in comparison to this.
This is Big Tech’s most dangerous plan yet.
Breitbart News has reached out to Microsoft for comment.
Allum Bokhari is the senior technology correspondent at Breitbart News. He is the author of #DELETED: Big Tech’s Battle to Erase the Trump Movement and Steal The Election.
.