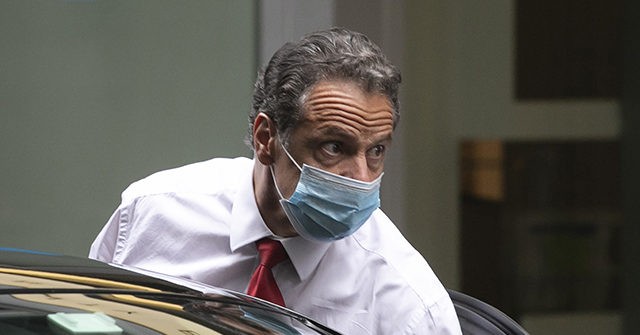 Third Woman Comes Forward on Andrew Cuomo
6,321 AP Photo/Mark Lennihan
Wendell Husebo
1 Mar 2021
Anna Ruch, 33, had never met Gov. Andrew Cuomo (D) before a New York City wedding reception in September 2019.
According to a report, the governor was working the room after toasting the newlyweds, and when he came upon Ruch, she thanked him for his kind words about her friends.
Cuomo “put his hand on Ruch’s bare lower back,” she said in an interview on Monday.
When she removed his hand with her own, the report cited:
Ruch recalled the governor remarked that she seemed ‘aggressive’ and placed his hands on her cheeks. He asked if he could kiss her, ‘loudly enough for a friend standing nearby to hear.’ Ruch was bewildered by the entreaty and pulled away as the governor drew closer.
“I was so confused and shocked and embarrassed,” said Ruch, whose recollection was corroborated by the friend, contemporaneous text messages and photographs from the event. “I turned my head away and didn’t have words in that moment.”
“He said, ‘Can I kiss you?’” Ruch said. “I felt so uncomfortable and embarrassed when really he is the one who should have been embarrassed.” Apparently, per the report, a friend captured the exchange in a series of photographs taken on Ruch’s cellphone.
Ruch later said she had to ask a friend if Cuomo’s lips had made contact with her face as she pulled away. The governor had kissed her cheek, she was told. Ruch said:
It’s the act of impunity that strikes me. I didn’t have a choice in that matter. I didn’t have a choice in his physical dominance over me at that moment. And that’s what infuriates me. And even with what I could do, removing his hand from my lower back, even doing that was not clear enough.
Ruch said she posed for a photograph with Cuomo afterward. Once the governor walked away, Ruch’s friend approached her with a look of alarm.
Ruch’s account comes after two former aides accused Cuomo of sexual harassment in the workplace, plunging his third term into turmoil as the governor’s defenders and Cuomo himself strain to explain his behavior.
“The women who have come forward with serious and credible charges against Governor Cuomo deserve to be heard and to be treated with dignity,” House Speaker Nancy Pelosi said. “The independent investigation must have due process and respect for everyone involved.”
CrimeEntertainmentPoliticsAndrew CuomoNancy PelosiSexual Abusesexual assaultsexual harassmentsexual misconduct
.