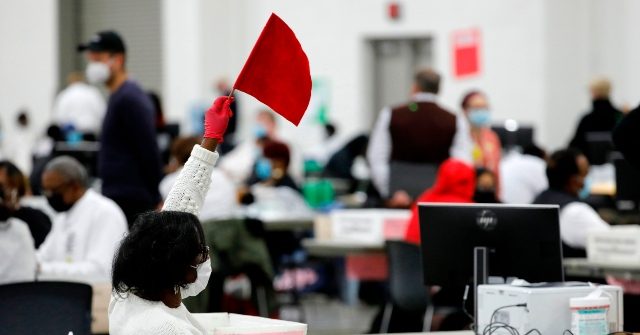 Michigan Begins Passing Election Integrity Bills: ‘A Lot of Things We Need to Change’
153 JEFF KOWALSKY/AFP via Getty Images
Kyle Olson
1 Mar 2021
Michigan state Rep. Matt Hall (R) told The Kyle Olson Show this week the legislature began passing bills intended to restore integrity to the election process.
Hall was chairman of the House Oversight Committee last session and held hearings that featured testimony from municipal workers, former President Donald Trump’s then-personal lawyer Rudy Giuliani, and counting observers who alleged officials did not follow laws and procedures.
Hall said there were concerns even before the election.
“The Michigan auditor general found that there were many people across our state who were over 120 years old, which is longer than the oldest living person and we found there’s over 300,000 people who were inactive voters who haven’t voted in over 20 years,” he said.
Hall said Secretary of State Jocelyn Benson (D) knew those facts but still sent out “millions of unsolicited absentee ballot applications to this inactive voter list.” However, Hall insisted “we knew the list was inaccurate.”
He told The Kyle Olson Show House Bill 4127 will remove dead and inactive voters from the rolls, which would help to restore confidence in the election process. The House also passed a bill introduced by state Rep. Julie Calley (R) related to HB 4127.
Hall said the voters would not be automatically ineligible to vote, but rather would be required to provide evidence that they should remain registered.
He said he concluded after holding a series of hearings that “there’s a lot of things that we need to change in our election law in Michigan.”
Hall cited improved training for city and county clerks who conduct the voting processes and specifically signature verification.
He also said the legislature should prevent the secretary of state from sending unsolicited absentee ballot applications, which a secretary had never sent before. Benson used coronavirus relief funds from the federal government to pay for the roughly $5 million expenditure.
While Republicans control the legislature, Hall said he has to remind constituents who are concerned about this issue that the state elected Democrats as governor, attorney general, and secretary of state, and in 2020, Democrats gained the majority on the state Supreme Court.
“What we’ve seen during the pandemic and also through the election is that these Democrats will just exceed their authority. I mean, they’ll just break laws and if you don’t have judges that will defend the laws, that’s how we get in this situation,” Hall told The Kyle Olson Show.
He floated the idea of organizing a ballot initiative if Whitmer rejects the proposals.
“We’re going to do everything we can to try to get this through and signed by the governor, but if we don’t, we’re going to have to look at other options,” Hall said.
Kyle Olson is a reporter for Breitbart News. He is also host of “The Kyle Olson Show,” syndicated on Michigan radio stations on Saturdays–download full podcast episodes. Follow him on Parler.
Politicselection integrityMatt HallMichiganThe Kyle Olson Show
.