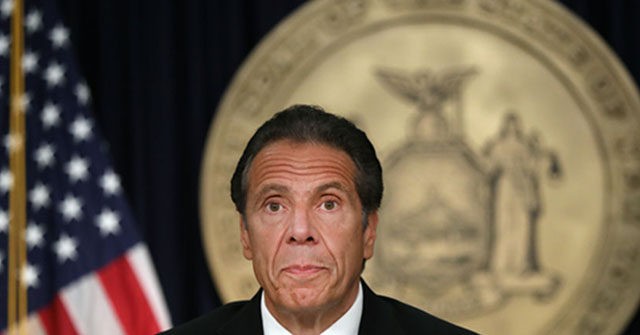 Four Democrat Governors Issued Similar Nursing Home Polices to Andrew Cuomo’s
Spencer Platt/Getty Images
Wendell Husebo
1 Mar 2021
Four Democrat governors enacted similar nursing home policies as Gov. Andrew Cuomo (D-NY) did in 2020, amid the coronavirus pandemic.
The governors of Michigan, California, New Jersey, and Pennsylvania approved similar policies as fears grew that new patients would overwhelm hospitals.
Gov. Gretchen Whitmer (D-MI) issued an order that a long-term care facility “must not prohibit admission or readmission of a resident based on COVID-19 [coronavirus] testing requirements or results.” The policy was renewed three times before being rescinded in July 2020.
Gov. Gavin Newsom’s (D-CA) administration ordered on April 10, 2020, that “patients hospitalized, or receiving treatment at an alternate care site, with COVID-19 can be discharged to a [skilled nursing facility] when clinically indicated.”
Gov. Phil Murphy (D-NJ) approved a directive from state Health Commissioner Judith Persichilli that said no patient could be denied admission or readmission to a nursing home “solely based on a confirmed diagnosis of COVID-19.” A patient may not be discharged until diagnostic test results have confirmed whether he or she should be discharged. However, nursing homes cannot require a discharged patient to undergo a coronavirus test as a prerequisite for admission to the nursing home as long as doctors conclude the patient is “medically stable.”
Gov. Tom Wolf (D-PA) enacted a mandatory admission policy in March, saying “nursing care facilities must continue to accept new admissions and receive readmissions for current residents who have been discharged from the hospital who are stable.”
President Joe Biden nominated Pennsylvania transgender health official Rachel Levine, who worked under Wolf, for assistant secretary of Department of Health and Human Services (HHS) on January 19, 2021.
While working as health secretary for the Commonwealth of Pennsylvania, Levine drew criticism for allowing “stable” coronavirus patients to return to nursing homes during the pandemic, receiving blame for the virus skyrocketing among the elderly in those facilities. Levine’s mother, however, left a nursing home facility at her child’s behest, despite the department’s guidance to admit “stable” patients who had contracted the virus.
“I want to emphasize, that while these individuals think that they are only expressing their displeasure with me, they are, in fact, hurting the thousands of LGBTQ Pennsylvanians who suffer directly from these current demonstrations of harassment,” Levine said in response to her decisions.
As of March 1, 2021, only Cuomo’s office has faced accusations of manipulating the data on nursing home resident deaths by excluding the numbers of those who died after being transferred to hospitals. A leaked call with Cuomo’s aide Melissa DeRosa and state Democrats confirmed the administration undercounted fatalities to preserve its reputation.
HealthPoliticsScienceAndrew CuomocoronavirusGavin NewsomGretchen WhitmerNursing HomesPhil MurphyTom Wolf
.