Donald Trump Calls Out ‘RINO’ Republicans at CPAC: ‘Get Rid of Them All’ 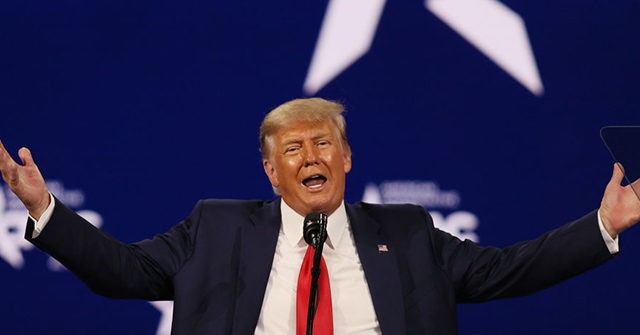 Donald Trump Calls Out ‘RINO’ Republicans at CPAC: ‘Get Rid of Them All’
84
American Conservative Union
Charlie Spiering
28 Feb 2021
Former President Donald Trump on Sunday listed a handful of Congressional Republicans who opposed him after the 2020 election, urging his supporters to vote them out of office.
Trump spoke at the Conservative Political Action Conference (CPAC), shaming the Republicans who continued to publicly oppose him and those who voted with Democrats to impeach him after he left office.
The list included 17 Republicans:
Sen. Richard M. Burr of North Carolina
Sen. Bill Cassidy of Louisiana
Sen. Susan Collins of Maine
Sen. Lisa Murkowski of Alaska
Sen. Mitt Romney of Utah
Sen. Ben Sasse of Nebraska
Sen. Patrick J. Toomey of Pennsylvania
Rep. Tom Rice of South Carolina
Rep. Dan Newhouse of Washington
Rep. Adam Kinzinger of Illinois
Rep. Anthony Gonzalez of Ohio
Rep. Fred Upton of Michigan
Rep. Jaime Herrera Beutler of Washington
Rep. Peter Meijer of Michigan
Rep. John Katko of New York
Rep. David Valadao of California
Rep. Liz Cheney of Wyoming
Trump saved Cheney for last, decrying her as a “warmonger” and noted that the Wyoming GOP censured her over voting to impeach him.
“In her state, her poll numbers have dropped faster than any human being I’ve ever seen,” he said.
“Hopefully they’ll get rid of her in the next election,” he continued. “Get rid of them all.”
Trump warned that the RINOs who continued to oppose him would further divide the Republican party.
“The Republican Party is united. The only division is between a handful of Washington, D.C., establishment political hacks,” he said.
Again, he praised Democrats for sticking together in political fights and decried Republicans for divisiveness in the party.
“If Republicans do not stick together, the RINOs that we’re surrounded with will destroy the Republican party and the American worker and will destroy our country itself,” he said.
Trump did not specifically call out Senate Minority Leader Mitch McConnell, but recalled that he saved his senate seat in Kentucky by giving him an endorsement, which he reminded voters was “at his request.”
He cited the success of the House Republicans in the 2020 elections, insisting the party rode on the “coattails” of his presidential campaign.
“That’s why I am announcing that I will be actively working to elect strong tough and smart Republican leaders,” he said.
PoliticsCPACDonald TrumpLiz Cheney
.

Original Story: Donald Trump Calls Out ‘RINO’ Republicans at CPAC: ‘Get Rid of Them All’