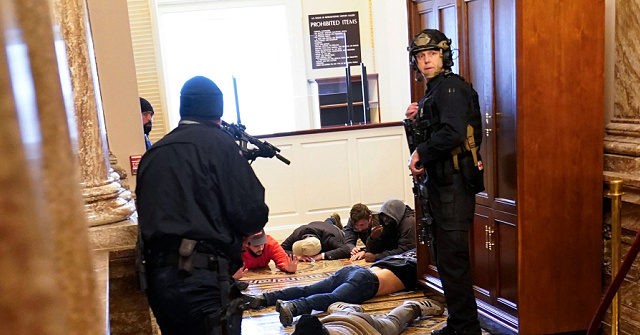 Acting Deputy Attorney General John Carlin: DOJ Investigating January 6 at ‘Unprecedented’ Speed, Scale
2 AP Photo/Andrew Harnik
Kristina Wong
1 Mar 2021
The Biden Justice Department is investigating the events of January 6 at a “speed and scale that is unprecedented,” Acting Deputy Attorney General John Carlin, who recently spoke at an event on the department’s “enhanced response to domestic violent extremism and domestic terrorism.”
Carlin said Friday:
The first briefing that I received in my new job was about the effort to bring the perpetrators of the January 6 attacks to justice and prevent future violent attacks. The investigation into those responsible is moving at a speed and scale that is unprecedented, and rightly so. Those responsible must be held to account, and they will be.
Carlin said he receives updates “at least daily”on the investigation, and as of last week, over 300 have been charged “in connection with the events of January 6,” and over 280 have been arrested. (There were at least several thousand who attended a rally near the White House and around the Capitol Building, according to some reports and estimates).
Carlin said he met with the members of the prosecution team and they are “committed,” “determined,” and “will keep us safe from the threat of violent extremism.”
Carlin said D.C. was “under lockdown” and filled with hundreds of soldiers to protect the city from “terrorists.”
When I left the Department as Assistant Attorney General for National Security in October of 2016, the threat from violent extremists, both international and domestic, was rising.
But, I never expected that just over four years later, when I returned to the Justice Department to be sworn in on my first day as Acting Deputy Attorney General, that to get to the building, I would have to pass through numerous checkpoints under escort of armed agents in a city under lockdown. I never expected to have to walk through the Department of Justice hallways filled with hundreds of soldiers positioned to protect the Department from terrorists. But I did.
He also said the threat “is bigger than any one event,” and added they included “efforts to intimidate or terrorize our neighbors and members of our community based only on who they are and what they look like.”
“The Department of Justice is prioritizing the detection, the disruption, and deterrence of the threat of domestic terrorism and violent extremism in all its forms,” he added.
Carlin said the DOJ will maintain its commitment to civil liberties, however.
“The FBI, as you will hear, very deliberately uses the term ‘domestic violent extremism’ in this area to emphasize that FBI investigations must be predicated on criminal violence and other criminal conduct – never on someone’s First Amendment beliefs or associations,” he said.
The Biden DOJ’s “enhanced response” to domestic extremism comes as Democrats have tried to brand every attendee of the January 6 rally and protest at the Capitol a domestic terrorist.
Speaker Pelosi: “Those insurrectionists were not patriots, they were not part of a political base to be catered to and managed. They were domestic terrorists, and justice must prevail.” pic.twitter.com/rNUV0gtT1c
— CBS Evening News (@CBSEveningNews) January 13, 2021