Wayne LaPierre at CPAC: Leftists ‘Would Rather Kill the 2A than Save Lives’ 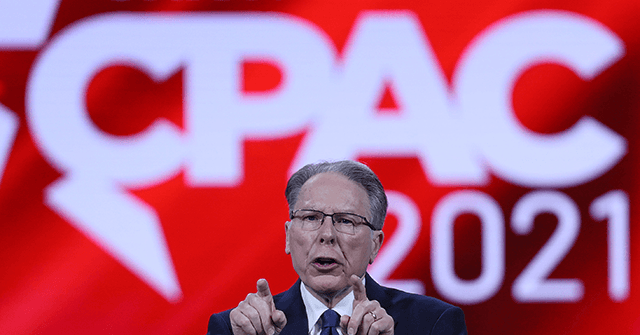 Wayne LaPierre at CPAC: Leftists ‘Would Rather Kill the 2A than Save Lives’
1 Joe Raedle/Getty Images
AWR Hawkins
28 Feb 2021
While speaking Sunday at CPAC 2021, the NRA’s Wayne LaPierre suggested leftist politicians “would rather kill the Second Amendment than save lives.”
LaPierre referenced President Joe Biden, House Speaker Nancy Pelosi (D-CA), and Senate Majority Leader Chuck Schumer (D-NY), suggesting “they’re using rising homicide statistics as political fodder, in their warped crusade against the Second Amendment.”
He continued, “Criminals committing crimes with guns gives them the platform they need to lie and attack your freedom. It keeps the TV cameras always pointed in their direction and it keeps and endless stream of money flowing into their campaign coffers from billionaires like Michael Bloomberg.”
LaPierre described the left’s approach as “sick [and] twisted,” adding, “They would rather get tough on the law-abiding than go out and get tough on criminals. They would rather kill the Second Amendment than save lives.”
He noted, “They want each and every one of us to be forced to confront evil with empty hands.”
LaPierre claimed part of the leftist playbook is marked by calls to “empty the prisons, let criminals run free, [and] hamstring the police.” He said the playbook is built on a commitment to “surrender the streets and then, to hold freedom hostage and demand that honest citizens…give up [their] guns as the price for ending the criminal bloodshed that [the left’s] policies enable.”
AWR Hawkins is an award-winning Second Amendment columnist for Breitbart News and the writer/curator of Down Range with AWR Hawkins, a weekly newsletter focused on all things Second Amendment, also for Breitbart News. He is the political analyst for Armed American Radio. Follow him on Twitter: @AWRHawkins. Reach him directly at awrhawkins@breitbart.com. Sign up to get Down Range at breitbart.com/downrange.
2nd AmendmentPoliticsCPACMichael BloombergNRAWayne LaPierre
.

Original Story: Wayne LaPierre at CPAC: Leftists ‘Would Rather Kill the 2A than Save Lives’