McCarthy: Today’s GOP is standing up for the American public 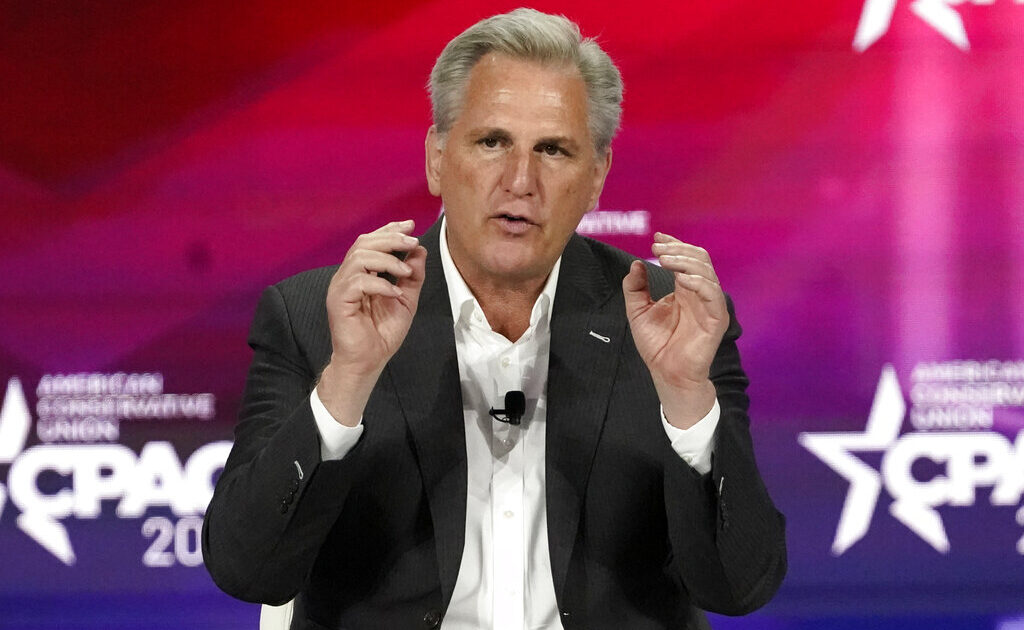 UPDATED 7:25 PM PT – Saturday, February 27, 2021
Top Republicans are looking forward to the 2022 election and beyond, hoping to ride the red wave to victory.
On Saturday, House Minority Leader Kevin McCarthy (R-Calif.) told conservatives at CPAC that Americans will gravitate towards Republican candidates. He explained this is because Democrats are steamrolling laws that don’t align with the needs of the American people, namely Joe Biden’s nearly $2 trillion coronavirus relief bill.
“Look what happened this morning at 2:00 a.m., Nancy Pelosi put about a $2 trillion bill and there was a vote on the floor. She put a tunnel in Silicon Valley that has nothing to do with COVID into the bill,” McCarthy stated. “We wanted to take that money and give it to the kids to get them back in school. It’s an easy discussion.”
Look what happened this morning at 2am:
• Nancy Pelosi snuck in a $140 million dollar tunnel near her district—which has nothing to do with COVID.
• Republicans voted to shift that money to kids’ mental health services instead.
• Democrats blocked the money for the kids. pic.twitter.com/5dluuyR1hy
— Kevin McCarthy (@GOPLeader) February 27, 2021On Saturday, House Democrats passed the baton off to the Democrat-controlled Senate regarding the passage of the bill. The bill moved through the lower chamber by a largely partisan vote.
Several Republicans in both chambers of Congress have deemed the bill a “liberal wish list.” They took issue with several provisions of the bill, including raising the federal minimum wage to $15 an hour and bailing out blue states struggling with the coronavirus.
McCarthy believes this will boost the GOP’s image heading into the next polls.
“We want people back to work, back to school, back to health. Pelosi wants to put more tunnels, more waste, and the Democrats voted for it. It’s a clear place who’s standing for the American public and who’s standing for corporations,” McCarthy said. “It’s the Republican Party today and it’s what we’re going to be tomorrow and in the future. And that’s why America is going to be stronger, because we’ll put America first.”
The minority leader hopes more Americans will look to the GOP to tend to the needs of all residents, building off the momentum gained in 2020 when Republicans gained 10 seats in the House.
Many representatives in the GOP freshman class were women and came from minority communities.
Kevin McCarthy celebrates the 15 House seats picked up in 2020 by GOP women and minorities. @GOPLeader#AmericaUncanceled #CPAC2021 pic.twitter.com/t5vM180SAp
— CPAC 2021 (@CPAC) February 27, 2021“We got closer than anybody thought we could get. They said we’re going to lose 20 seats that night. No one said we’d win seats. My dearest friend who is a hardcore Republican said at best we could lose 10 and let me give you a little secret and a little facts, because I want you to tell your friends, especially your liberal friends, this is the first time since 1994,” McCarthy said. “No incumbent Republican lost. We beat 15 Democrats.”
In the meantime, officials within the GOP are gearing up for the midterm elections and setting their sights on 47 seats to flip. Millions of dollars have already been raised to give Republicans a boost for the long road ahead towards November 2022.

Original Story: McCarthy: Today’s GOP is standing up for the American public