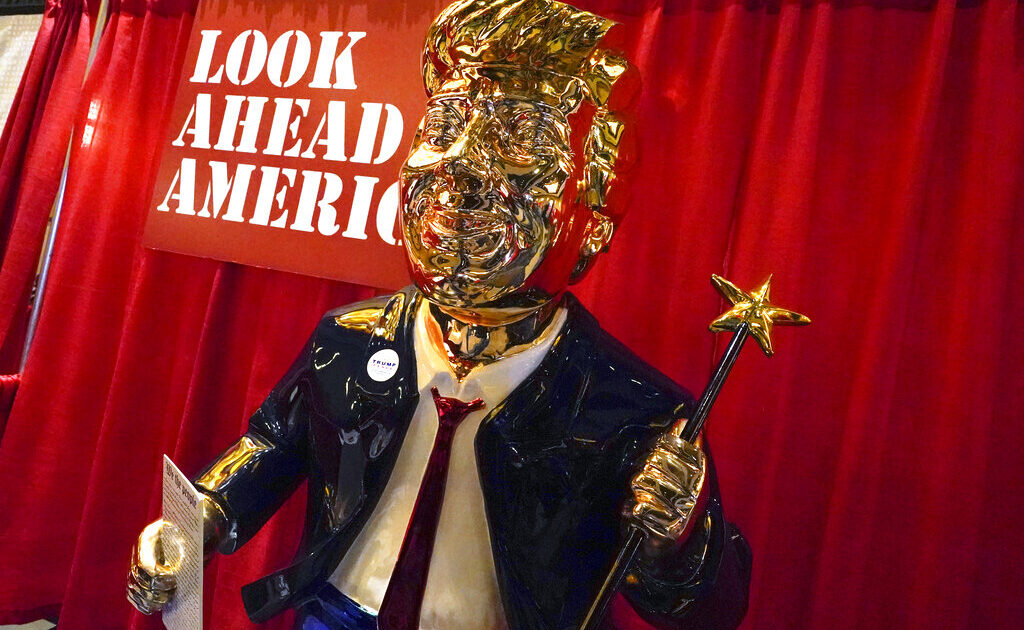 UPDATED 12:50 PM PT – Saturday, February 27, 2021
Republicans at this year’s CPAC gathering were met with a familiar face after an artist unveiled a golden statue resembling President Trump. On Friday, artist Tommy Zegan shared his gold statue of the 45th President with CPAC attendees. The statue stands at 43-inches tall.

Zegan said his artwork contained several symbolic elements that represent President Trump’s achievements, from being a successful businessman to one of the main faces of the Republican Party.
“Well, about three years ago, when they were coming out with the ‘Baby Trump’ and the ‘Trump on a toilet,’ [and] ‘Naked Trump,’ I was disgusted with those and I said I could do a better job,” Zegan said. “So I designed this. The first one is made out of stainless steel. This one here that I take on the road is made out of fiberglass and the third one that I have right now is a bronze one that will eventually be 24-carat gold.”

ORLANDO, FLORIDA – FEBRUARY 27: People take a picture with former President Donald Trump’s statue on display at the Conservative Political Action Conference held in the Hyatt Regency on February 27, 2021 in Orlando, Florida. Begun in 1974, CPAC brings together conservative organizations, activists, and world leaders to discuss issues important to them. (Photo by Joe Raedle/Getty Images)
The statue of President Trump caught the attention of CPAC attendees, with many stopping to take photos with the figure. President Trump is expected to speak this Sunday to highlight his achievements while laying out the future of the Republican Party.