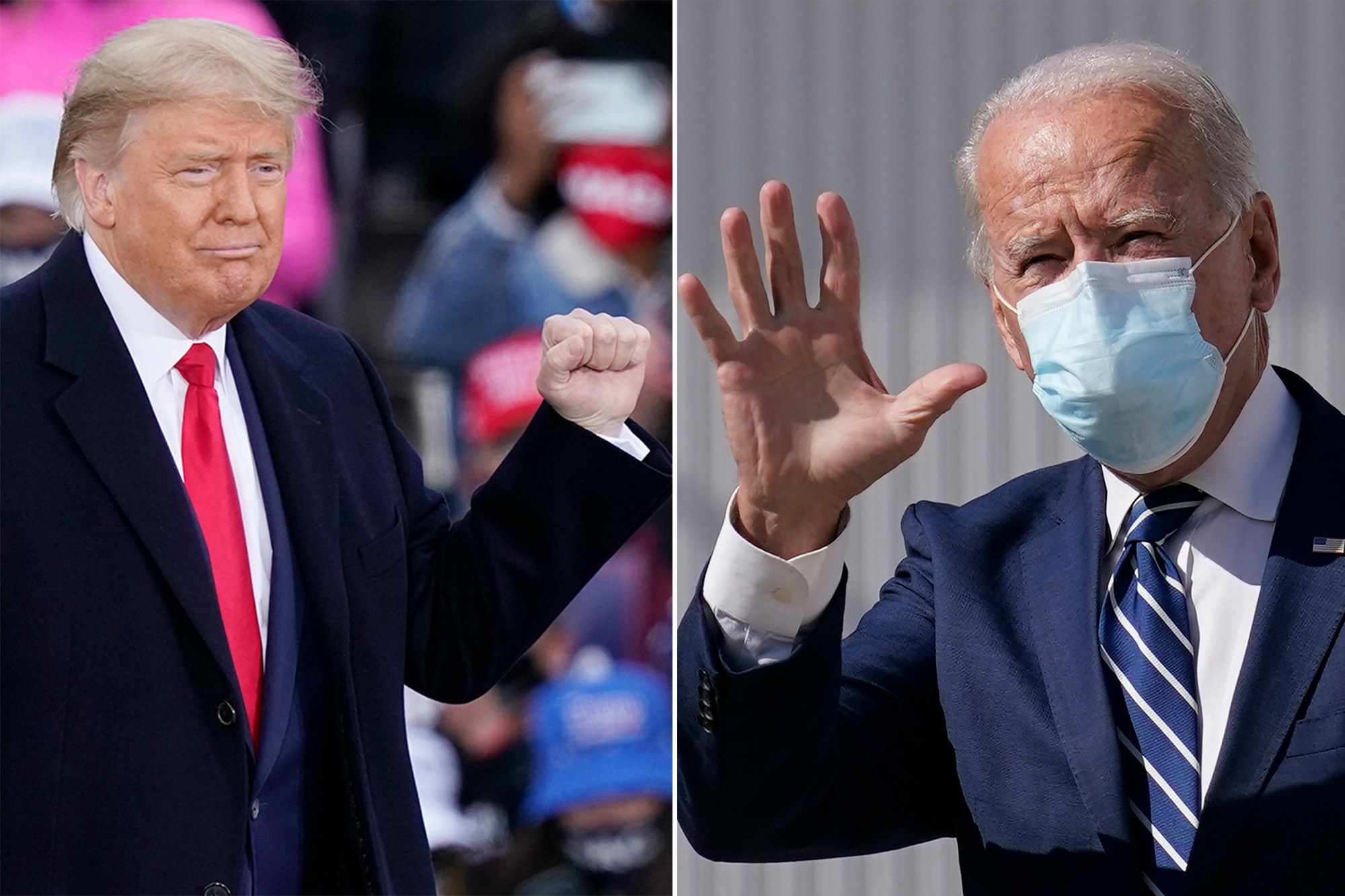 It was back to the basement for Joe Biden Saturday — as President Trump went into campaign overdrive.

With only 16 days to go before Election Day, amid an uproar over The Post’s expose of son Hunter’s shady foreign business deals and with a second debate face-off this week, Biden retreated to his Delaware home with no public events on his schedule — and a substantial but slightly slipping national polling lead in his pocket.

Meanwhile, the underdog president whipped up his troops Saturday at back-to-back rallies in two crucial battleground states, with two more of the raucous gatherings set for Sunday and a full slate of appearances this week that will have him hopscotching across the country.

The candidates’ plans on the third-to-last weekend of the election season are polar opposites: while Trump plans four mega-rallies in four battleground states, Biden will hold a single small event, a car parade planned for Sunday afternoon in Durham, N.C.

“We’ve done everything we said, and more,” Trump told cheering supporters at Muskegon County Airport in Muskegon, Mich. — one of the Democratic strongholds he won by a fraction of a percentage point in 2016.

“But Sleepy Joe has made a corrupt bargain: he has handed his party over to the hardcore militant left,” he said. “They crave power, and God help us if they ever did get it.”

As a stiff breeze lifted Trump’s lacquered hair off his head, he accepted a bright red campaign hat from an aide to protect his signature ‘do.

“Normally when I have the hat I like to take the tie off, but the heck with it, right?” he said.

The president repeatedly invoked The Post’s recent reports on Hunter Biden’s business dealings – and subsequent allegations that Joe Biden himself may have profited from them.

“They found his laptop — can you believe this guy?” Trump asked. “Now I call him the vacuum cleaner. His father goes into a country, he’s right behind him saying ‘give me cash,’” Trump said. “Talk about quid pro quo.”

“Joe Biden is a corrupt politician and the Biden family is a criminal enterprise,” he declared. “He makes Hillary Clinton look like amateur hour.”

After the 90-minute speech, he left Michigan for a second rally in Janesville, Wis.

Both Rust Belt states were key bricks in the Democratic “blue wall” that crumbled to Trump in the last presidential election — and that Biden’s campaign intends to wrest back.

Biden made one of his infrequent appearances in Michigan on Friday.

Since August, Trump has made 37 appearances in 15 states — despite being forced off the stump for 10 days to recover from a case of COVID-19.

Biden, who did not begin in-person campaigning until Labor Day, has made stops in only 20 cities, each appearance limited to a few dozen attendees.

And with his polling lead in the top Electoral College battlegrounds hovering at just under 5 percent, few Democrats are complaining about his laid-back schedule.

“Joe Biden is doing exactly what he needs to do to win,” Democratic strategist Eric Koch told The Post.

Biden’s polling edge over Trump eroded slightly this week amid The Post’s scandalous revelations about his son Hunter’s foreign dealings.

The IBD/TIPP national tracking poll, released Saturday, puts Biden at 50 percent in the head-to-head matchup, with Trump at 43 percent. The 7-point advantage is well outside the survey’s 3 percent margin of error.

But the poll of 1,009 likely voters saw Biden’s support slip by just over 2 percentage points since Monday — and found an increase of almost 1 percent for the incumbent.

The new survey contributed to a 1-point dip in Biden’s national polling average since Monday, according to RealClearPolitics.

The threat of the pandemic looms large in Biden’s sleepy campaign strategy.

“I think people realize that Biden is looking out for people’s safety,” said Bret Nilles, chairman of the Linn County Democrats in Iowa, another potential Democratic pickup. “We want people to be able to get out and vote and not be in the hospital.”

Others sounded a note of caution.

“I’m not as convinced as the average Democrat might be that Michigan is in the bag,” said Ron Fournier, president of Detroit-based communications firm Truscott Rossman. “Biden is not taking Michigan for granted, but he has not been here a lot” — and even party insiders have been in the dark about his little-publicized events.

“You don’t want to lose a state like this if one more visit could have made a difference,” Fournier said.

Meanwhile, Trump has taken to lamenting his underdog status in the presidential race — while at the same time promising Republicans of a “GIANT RED WAVE COMING!”

“Could you imagine if I lose?” Trump said Friday night in Macon, Ga., at his second campaign rally of another marathon two-state day. “Maybe I’ll have to leave the country. I don’t know.”